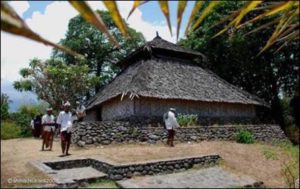 The headman of Bayan beliefs if Bayan Beleq mosque was built during the same era of early Islam in Lombok Island in 11th century. This is the first mosque in Lombok Island and also a historical site in Indonesia. The age of this mosque is over 300 years old. The mosque is 9×9 meter with low wall made of bamboo braids, roof from overlapping bamboo blades, and its foundation is made from river stones. People only use this mosque during Islamic festivals. Women are not allowed to get into the building.